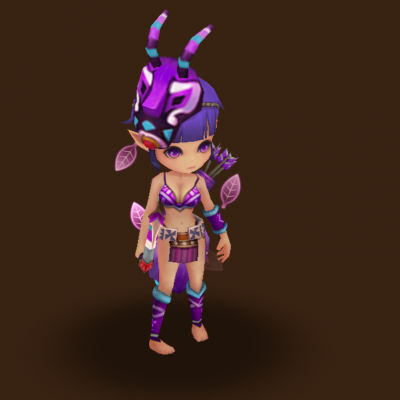 Mara is the best Amazon in terms of damage output. She got a huge base attack at a whooping 911 which is already comparable to Sigmarus. The same thing as sigma, Mara is very squishy. I mean very squishy.

Anyway, let’s take a look on her skills. Her first skill is the standard skill of amazon, which is attacks an enemy with 30% CR bonus.

Mara’s second skill attacks an enemy twice, and has 50% (@max skill) chance for each attack to inflict a disturb HP debuff. Statistically, considering that she will shoot twice, it would make it a guaranteed HP disturb debuff whenever this skill has been used. This skill is helpful during raid but i don’t think Mara can survice Raid Boss because of her low base HP and Def. She will die in an instant.

The third skill Soul Crush, disturb HP recovery for 2 turns with arrows that destroy the enemy’s soul. The enemy can’t be revived if the enemy is killed with this skill. This skill is anti Perna. Quite useful skill.

I would recommend to rune her Fatal/Blade (ATK/CD/ATK) to take advantage of his high base attack. However, if you are already farming necro, then by all means you can use Rage.

So where you can use Mara?

Early to mid game, she is a killer in the arena offence and defence.