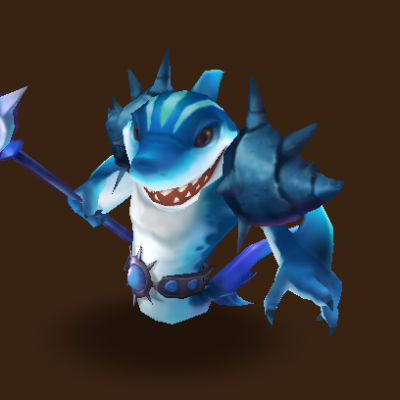 Aqcus is an attack type Charger shark with pretty decent base stats considering that this guy is only a natural born 3 star. His base HP is 9060 @ level 40 is not that high but pretty decent in comparison with other glass cannons like the samurai. His attack is 714 is not also very high but it’s ok in comparison to other tiger shark, Acqus most probably has the most balance stats.

Let’s take a look on his first skill. He attacks a single target inflicting a damage and increases his critical rate for 1 turn. This matches his profile as an attack type monster. This skill is pretty similar with the basic attack of shimitae but acqus is much better because it’s not conditional. This skill makes Acqus as an ideal Rage/Blade user.

His second skill attacks an enemy target, decreasing its Attack Power and Attack Speed for 2 turns with an 80% chance. This is pretty cool debuff. But take note this is a single target debuff thus it’s not that impressive.

Aqcus The Smell of Blood  skill is a passive one that when landing as a Critical Hit, this attack additionally inflicts Continuous Damage for 1 turn on the target. If the target dies from this attack, you will heal as much as the amount of damage dealt as the finishing blow. This skill makes him as a candidate for dragon and Giant farming.

I recommend to use Rage/Blade(ATK/CR/ATK) to fully maximize his skills.

So where you can use Aqcus?

You can use Aqcus in the arena offence and defence. Moreover because of his continuous damage for every attack he is an ideal Giant and Dragon farmer. If you take this path, make sure to get 100% crit and increase his HP.

7.1
Post a Review Please not that each user review reflects the opinion of it's respectful author.