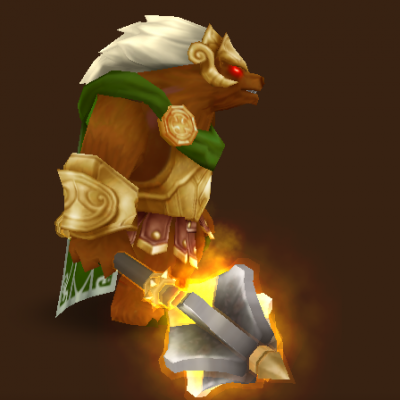 Dagorr is actually one of my best attacker during my early stages of playing summoners war. First let’s take a look on his stats, he got 9885 HP @level 40. That’s pretty decent considering that he is an attack type. His attack is 692 pretty low but still decent. The defence is a little bit of problem, he got only 461. Speed is decent too. So overall stat wise he is good.

Now let’s take  a look on his skills. First skill will provoke the enemy with 85% chance. Because of this provoke and his high HP pool, put at least one or two HP % and the rest are ATK %. Second skill increases the attack power of allies for 2 turns and remove 2 harmful effects. Because of this cleanse capability, he is viable option for Giant dungeon run. The third skill is an aoe skill that deals damage and decrease the attack bar of enemies by 30%. That would make him a perfect option for giant run.

For the runes i would recommend Full Energy and then on slot 2 would be Speed, slot 4 HP %, and at slot 6 would be ATK %. You can rune him Violent/Revenge too. Fatal/Blade or Rage/Blade would do just fine depending on where you want to use Dagorr. But for Giant, use full energy.

So where you can use Dagorr?

Dagorr can be use anywhere as a support attacker.