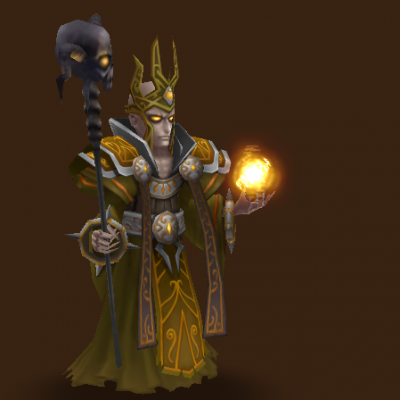 Fuco got an awesome set of skills. With his shield, he can actually tank most of water bosses available in summoners war. He can be used as a farmer also in Alden because of his shield. To effectively use Fuco for farming Alden, he must have Violent/Focus runes with HP % on slot 2, ATK % on slot 4, and ATK% on slot 6.

This guy is actually annoying in the arena because he is very tanky. Let’s take a look on his 1st skill. Soul Summoning attack an enemy and decreases target’s enemy speed. This is pretty helpful in the arena because speed is very very important in both offence and defence, so a decrease on this attributes will surely hurt a lot.

His second skill Deadly Touch which randomly attacks the enemies (AOE) several times and can weaken enemy’s defence by 2 turns @35% chance with each attack. Moreover the attack speed decrease harmful effect on the enemies changes into freeze effect. Consider this, if this guy hits you with his first skill and you got attack speed debuff, once he uses his second skill you lost turns which is deadly. And fuco’s skill can be used every 2 turs if max skill. Scary? Wait for his third skill.

His first skill and second skill works in synergy. His third skill Wall Of The Dead is a passive skill that creates a shield every turn to absorb incoming damage proportionate to your level. Decreases the attacker’s Attack Speed for 1 turn if you’re attacked when you have the shield. His third skill also complements his Deadly Touch.

So where you can use Fuco?

You can use him in arena offence and defence. He is both an offensive and defensive monster depending on how you rune him. I prefer balance, like ATK/HP/Accu. But consider that this will depend on your team on how would you like Fuco to function. You can rune him anything and simply it will work because inherently this guy is awesome. But i suggest make him high \ accuracy to effectively used his debuff skills and add some resistance.