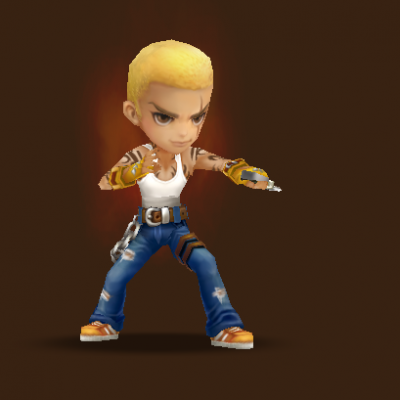 Seriously, I am a little bit disappointed with Logan’s base stats considering that he is a natural born 4 star monster. His base HP is barely 9720 at level 40. His attack is also average for 725 at level 40. Anyway, at least his stats are average and decent.

Logan’s first skill attacks a target enemy with daggers and increases your Attack Power for the next 2 turns. This skill is pretty good because the attack power buff and because it is for 2 turns, consider him having unlimited buff.

His second skill Sharp Strike, attacks an enemy and inflicts Continuous Damage for 2 turns. This attack will also decrease the enemy’s Defense for 2 turns if it lands as a Critical Hit. Although the defence debuff is conditional, it would still be helpful because he is an attack type and definitely critical rate will be built on this guy for him to be effective.

The third skill of Logan is what him unique. Attacks an enemy 2 times and decreases their Attack Speed for 3 turns. Each hit will also decrease the enemy’s Attack Bar by 30%. If the enemy’s Attack Bar gets depleted by this attack, you instantly recover your turn. The decreases on the enemy speed is helpful, which pretty much desired now in the arena as speed matters at the later part of the game thus a 3 turn decrease on attack speed is pretty good. You will be hitting the enemy twice and each atatck deplete also the enemy’s attack bar, same like the skill of Yen but this guy is better because he gains another turn if the attack bar of the enemy got depleted because of his third skill, automatically you gain a turn. Pretty deadly.

You can build Logan with Rage/Blade(ATK/CD/ATK). He will hit hard on this runes. But if you prefer speed, swift can also work.

So where you can use Logan?

You can use him in arena offence, toa as your main nuker.