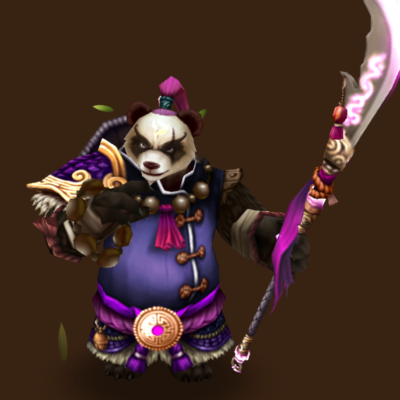 Mi Ying is different than the rest of the Panda Warrior. He is the only one that is an Attack Type and he is the only one who is not slow. High Base attack while having a decent amount of HP of 10k. That base HP is decent but not ok however with the base defence of 648, that would make him a tanky attacker. One thing for certain, Mi Ying is overpower, I will show you later on why I said that this guy is OP.

Let’s take a look on his skills and check if the awesome stats would complement its skills.

First and foremost his first skill is the same as the like of Darion and Bella but just got better. This skill attack the enemy 3 times with 30% chance to apply defense debuff to the enemy. Because of multi attack, on the first skill, Tian Lang is a good candidate for Necropolis farming. The defense debuff on this skill adding his high HP and defence, this Dark Panda Warrior will definitely a good Arena Defence and Offence mob.

The second skill of Mi Ying, removes the harmful effects casted on yourself and counterattacks for 2 turns when attacked. Recovers 15% of the HP of all allies in each turn for the next 2 turns. The counter attack is scary addition on this skill because of the defence debuff from first skill. This would save us two slot of rune because we no longer need to use a revenge rune.

Mi Ying’s third skill is comparable to that of the skill of Lucas but this one is an AOE skill. The shield is scaled through the damage incurred to the enemy. This is pretty handy considering he got a decent HP and Defence, that would make him one of the best Arena monster.

I would recommend to build him Violent/Blade to make him as Attacker r. Violent for him to use more of his skills and revenge for him to make use of his first skill more often For slot 2 and 6, put a Attack while on slot 4, it should Critical Damage. It would be tricky to rune him because you can use him also as debuffer however I think it would be a waste to do so because that would limit his potential as Damager.

So where you can use Mi Ying?

He can be used anywhere because of his high base stats and useful skills. If you are planning to use him as Necropolis Dungeon farmer, do not expect him to perform as that of his brother because he only have one multi attack. But he would be very useful as your primary nuker in Necro.

8.5
Post a Review Please not that each user review reflects the opinion of it's respectful author. 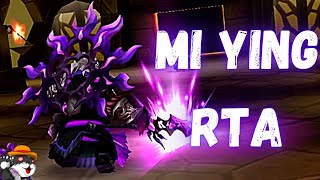