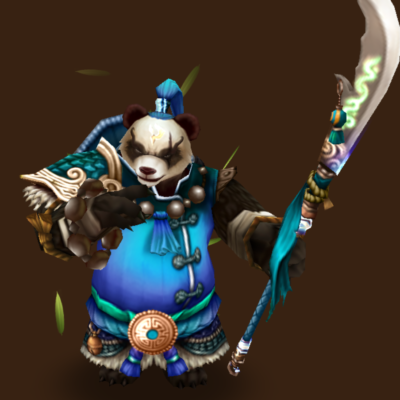 Mo Long has a very high HP and a decent defence pool. As expected for a natural born 5 star, the stats are incredibly amazing.

His first skill is basically like the skill of Darion and Bella but just got better. This skill is basically attack the enemy 3 times with 30% chance to apply defense debuff to the enemy. Because of multi attack, on the first skill, Mo Long is a good candidate for Necropolis farming. The defense debuff on this skill adding his high HP and defence, this Water Panda Warrior will definitely a good Arena Defence mob.

The second skill of Mo Long, is an AOE skill which attacks all enemies 3 times. And each attack has 15% chance to remove a beneficial effect and stuns the enemy for 1 turn. Statistically, Mao Long can remove and stun an enemy with 50% chance. This is skill is totally perfect for debuffer. And since this is also a multi attack, it is official that Mo Long can be a Necropolis farmer.

The first skill and second skill of Mo Long is already awesome but his third skill makes him insanely good. It will incur a huge damage because it is scaled by the enemies’ HP. Although there is a drawback because it will also incur damage to yourself but it will easily be handled by pairing him with a good healer like Chasun.

I would recommend to build Mo Long with Violent/Revenge to make him as Tank Debuffer. Violent for him to use more of his skills and revenge for him to make use of his first skill more often For slot 2/4/6, put a lot of HP or one slot Def for him to be more tankier. Putting Accuracy on slot 6 will be a waste because he is inherently having a +25% accuracy already when awakened thus it would be much easier to get accuracy on substats.

So where you can use Mo Long?

He can be used anywhere because of his high base stats and useful skills. In Particular he is good in running Necropolis Dungeon because he got multi-hit skills.