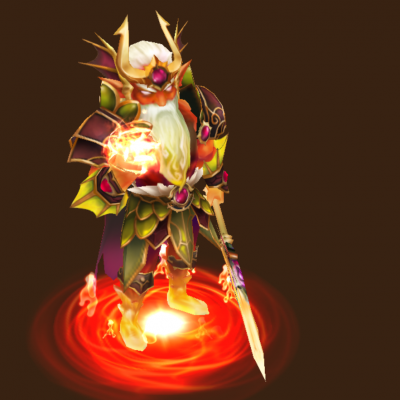 Okeanos as a natural born 5 star (nb5), is awesome. I mean really awesome. He can hit hard because of his high base attack and high damage skills. Most importantly he got a awakened bonus of +15% thus it wouldn’t be hard  to reach 100% critical rate. Okeanos will not also die easily because a decent hp and very high defence.

The fire sea emperor Power Surge, attacks an enemy, dealing damage and transferring a weakening effect on you to the enemy. This skill is handy in farming dragon and giant.

Okeanos Spear of Devastation, attacks an enemy target 2 times, removing its beneficial effects and turning the skills on cool time. His first skill and second skill combine will make him deadly but his third skill is much more awesome.

His third skill basically attacks the enemies several times with burning meteors. Each strike has 25% chance to stun the enemy for 1 turn. Believe me, this skill will clean up the floor if use right. This is actually good after Luer defence break and shannon/megan attack buff.

I would recommend runign Okeanos with Rage/Blade for high damage output. For slot 2 and 6, it should be Attack % while on slot 4 it should be Critical Damage. Make sure to get as much Critical Rate on substats. Okeanos will be useful if you get him with 100% critical rate.

So where you can use Okeanos?

You can use him everywhere.