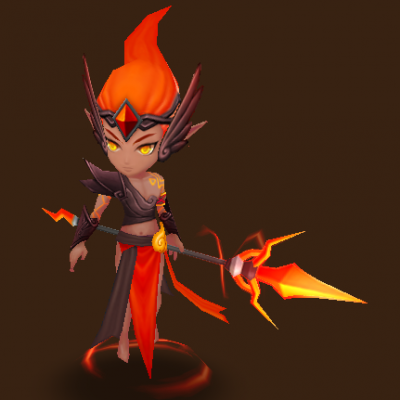 Baretta being one of the monsters that can be fused is a good monster for starters. Depending on the purpose you can rune her differently. If you want to utilize her 3rd skill, use despair and focus and you could never go wrong.  If you opt use despair/focus, personally i would put ATK/HP/ACC. The HP is necessary for her to survive Giant B8 and Dragon B10. I would even think of putting on slot 2 as SPD to make it hit more and incur more DOT.

For Baretta to be a good arena offence, I would suggest use Rage/Blade(ATK/CD/ATK). Baretta would really hit hard with this runes. The first skill of Baretta grants additional 30% crit once it hits critical. So in order to maximize this skill, get as much Critical Rate % from substats. Since Baretta has a decent base HP, make sure to get much HP% too from substats. The additional DOT that can be inflicted on her third skill will just be a bonus on this build.

You can also rune Baretta for Crowd Control capability. Having a third skill that grants DOT and it’s AOE, definitely you need a high Accuracy to maximize it’s potential. To further leverage on the high accuracy setup, you can put Despair too. Imagine the damage the opponent will suffer on this setup. 2 turns DOT, and on all target and the possibility of getting stunned will make the enemy run for their lives. I recommend to use Despair/Focus(SPD/HP/ACC) or you can put ATK too on 4th slot.

7.9
Post a Review Please not that each user review reflects the opinion of it's respectful author.