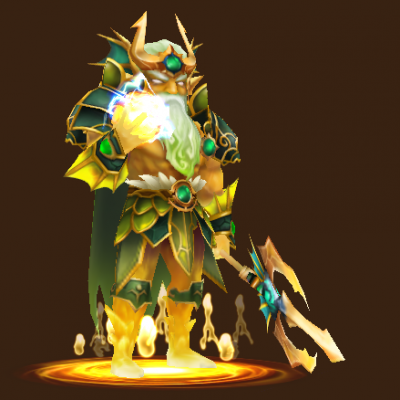 Triton as a natural born 5 star (nb5), is awesome. I mean really awesome. He can hit hard, will not die easily, he is fast, he got a couple of interesting skills. The wind sea emperor Mega Tsunami, decrease enemy’s attack bar by 55% @max skill and that is AOE. Pretty good. Let’s take a look on Sweeping waves, it’s also an aoe with cooldown of 4 turns @max skill, which prevents enemy to cast any skill. That is awesome. I mean really awesome.

Because the second skill and third skill are both aoe, and to make it more effective need high Accuracy. So it is advisable to rune him Despair to further maximize his potential. For his second skill it transfer weakening effect to the enemy, so revenge is also applicable. But focus is works just fine.

Make sure to make him fast so, slot 2 should be speed. And slot 6 should be accuracy. For slot 4, either HP or Attack would do just fine. It depends on what you want your triton to be.

So where you can use Triton?

You can use him everywhere.