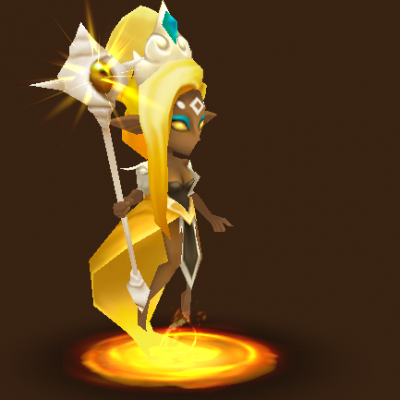 Delphoi skills are very helpful in almost everywhere. She is most probably the best wind support in summoners war. Her third skill Spirit’s Blessing is almost the same skill as Konamiya removing harmful effects on allies and recover HP as awell, but the only difference is that Delphoi grants immunity to all allies for 2 turns. Think of it as combination of Konamiya and Chloe.

Aside from her cleansing and healing skills, her 1st skill Mind Shock can decrease enemy’s speed for 2 turns. This is 100% proc rate the only condition is it must land as critical hit. So it would be imperative to build her as 100% crit rate which is attainable. Because of this, Delphoi is ideal for a violent/revenge runes.

Her 1st and 3rd skills were already good right? Let’s see what she can offer with her second skill. Mind Shock: Inflicts damage on an enemy with a strong shock and puts the target’s skill on cool down. All her skills are

Most of the support is susceptible to be killed easily because of low base stats. However with Delphoi you already have a whooping base HP of 10875 and 703 defence so just one HP% would make her tanky.

Ideal rune for her is Violent/Revenge (HP/CR/Resistance). Violent for additional turn. Revenge for more chance of decreasing enemy’s speed. Slot 2 for HP to make her more tanky. Crit rate for her second skill. Resistance for her to resist debuffs such as stun, freeze, defence break, etc.

So where you can use Delphoi?

You can use her in arena offence and defence. Most importantly she is a viable option for Giant and Dragon.