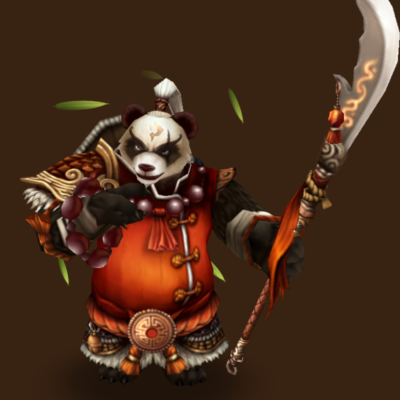 Xiong Fei has a very high Defense and a decent HP pool. As expected for a natural born 5 star, the stats are incredibly amazing. And you could get it easily because this guy can be acquired through fusion. Frankly speaking, the materials required to fuse Xiong Fei is very easy to acquire so there would be no reason not to have it.

His first skill is basically like the skill of Darion and Bella but just got better. This skill is basically attack the enemy 3 times with 30% chance to apply defense debuff to the enemy. Because of multi attack, on the first skill, Xiong Fei is a good candidate for Necropolis farming. The defense debuff with a very high chance and considering that he got a huge defense and HP pool, this Fire Panda Warrior will definitely a good Arena Defence mob.

The second skill is basically a self buff which removes all the harmful effects on yourself and a guaranteed counter-attack for 2 turns when being attack. The most awesome effect of this skill is in healing all allies by 15% HP by each turn for 2 turns. This is almost identical to the 3rd skill (Holy Water) of Water Archangel but a little weaker. Anyway, Xiong Fei is not a healer but the healing effect that goes with this skill is good enough for sustainability especially in running dungeons. Anyway this skill can be used every 3 turns if maxed. So it means, we can remove the possibility of using revenge rune as this guy will almost retaliate for every turn if attack.

Panda Supremacy is a multi hit as well which basically attacks the enemy 4 times. This makes Xiong Fei as an official Necropolis farmer. This skill attacks an enemy 4 times with each attack has a chance to apply a random harmful effect. And surprisingly this skill is scaled through Defence and the enemy’s Max HP.

I would recommend to build Xiong Fei with Violent/Focus to make him as Tank Debuffer. Violent for him to use more of his skills and focus for accuracy. For slot 2/4/6, put a lot of defence but one slot of HP would not hurt but it will help for sustainability. This is the only monster that I could think to have full defence because of the awakened bonus of plus resistance and that would make him more sustainable in terms of surviving defence debuffer(Darion/bella) in the arena. It would be easier to pump resistance now in substats because of the awakened bonus. Do not forget to get as much accuracy as possible on substats. Forget speed as this guy is very slow, so just increase his sustainability stats and he would be good.

So where you can use Xiong Fei?