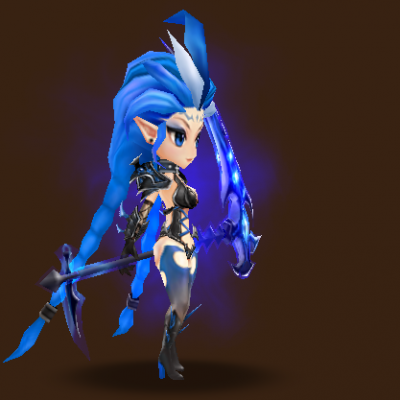 I am a little bit disappointed on the base stats of this monster. For a natural born 5 star, her attack is too low. Beth stats is comparable to that of Sylphs. Anyway aside from that, her 3rd skill can one hit delete any fire tank monster which is awesome. It basically attack two times and each attack has a chance to decrease of the enemy for 3 turns.

You can rune her with Rage/Blade (ATK/CD/ATK), just make sure to get as much critical rate on substats.

Beth being a high speed monster can be runed also using swift and for slot 2 as speed and the rest should be ATK. But this setup must be taken into account how you want to play her because certainly being a speed monster will diminish her attack power.  Her third skill can one hit delete anyone if you boost her attack power. If you want to nuke a high HP tank, you don’t need speed rather you need raw power. If you decide to forget her speed, certainly you need chloe or alternative to be successful because she is fragile thus she will die easily.

So where you can use Beth?

His damage output make him ideal as an arena offence. You can use him also on giant and dragons. Because Ethna is a water type monster and got a continous damage, she can be your main DPS in running Giant B10 and Dragon B10.