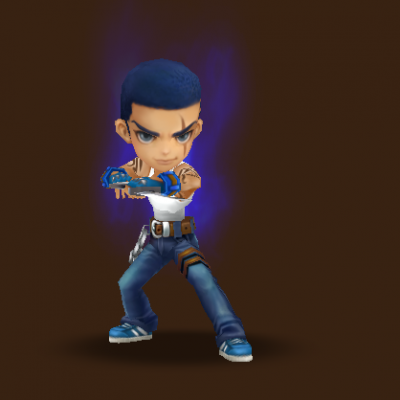 His first skill attacks a target enemy with daggers and increases your Attack Power for the next 2 turns. This skill is pretty good because the attack power buff and because it is for 2 turns, consider him having unlimited buff.

His second skill Sharp Strike, attacks an enemy and inflicts Continuous Damage for 2 turns. This attack will also decrease the enemy’s Defense for 2 turns if it lands as a Critical Hit. Although the defence debuff is conditional, it would still be helpful because he is an attack type and definitely critical rate will be built on this guy for him to be effective.

First two skill is the same as that of Logan. What distinct Ryan with the rest of Neostone Fighters, is his 3rd skill. Basically  he swiftly attacks an enemy 3 times, with each attack also dealing Continuous Damage for 1 turn. If this attack lands as a Critical Hit, it will also disturb the enemy’s recovery for 2 turns.

I am recommending to build Logan, as Rage/Blade. And on slot 2 and 6 as Attack % while on slot 4, put critical damage. Make sure to get accuracy and critical rate on substats.

So where you can use Ryan?

You can use him in arena offence, toa as your main nuker. Since his 2nd skill and 3rd skill can inflict continuous damage, he is ideal to be used as Giant and Dragon b10 farmer. If you go to this path make sure to rune him Violent/Focus(SPD/CR/ATK).