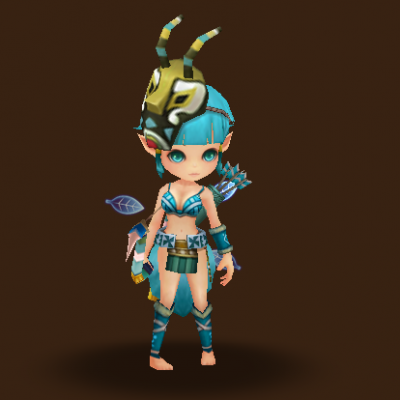 Ellin might looks cool but the problem is her base stats. He got a low HP pool. And her defence is pathetic. She only have 384. She is kinda like a sitting duck in the arena. One shot and she is dead.

One notable thing about her is her base attack of 823. It’s high considering that she is only a natural born 3 star. Although her base stat is mediocre, her skills are pretty decent. Hina’s third skill, attacks all enemies 4 times and each strike has 85% chance @max skills to decrease attack bar by 15%. This skill is very helpful in dealing with speed team.

Ellin’s second skill shoots 2 magic arrows that each have a 35% chance to freeze the enemy for 1 turn. Freezing rate is not that high however it’s a multi attack which pretty much useful in necropolis dungeon.

Her first skill is just a basic attack that has a 30% critical rate bonus.

I would recommend to build her with Despair/Focus to take advantage of her aoe skills which requires accuracy thus a despair would suit her really well.

So where you can use Ellin?

Early game, she is a killer in the arena offence and defence. You can use her as necropolis dungeon farmer.