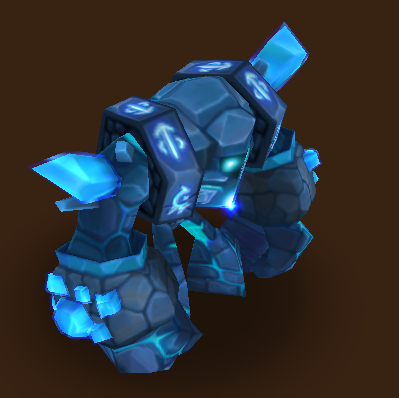 Kuhn is one hell of tank. His base HP is whooping 10,710 with 747 defence @awakened level 40. He is even harder than a bulldozer. Even though Kuhn is so slow, he makes up for it for his skills. Let’s take a look on what this guy can do.

His first skill were able to stun the enemy with 50% chance at max skills. Moreover this got a provoke effect also thus as a tank monster this is pretty handy. The damage is scaled through by his defence.

The first skill of Kuhn is quite cool but his second skill is more awesome. His second skill attacks all enemies and freezes them with 50% chance. That is scary. The damage of this skill is also scaled by the defence.

Kuhn’s third skill is a passive one. It generally decreases the incoming damage by 40%  if the HP is below 50%. That would make him more indestructible.

So basically you can rune him with anything that has HP % to make him more tankier. Add also some defence because this is his primary attribute and all his attack are scaled through def. Don’t forget to add some accuracy also for his freeze and stun skills. Revenge would also be useful for him because of his first skill.

So where you can use Kuhn?

You can use him everywhere. For his crowd control skills he is very helpful in toa, dungeons and scenarios.