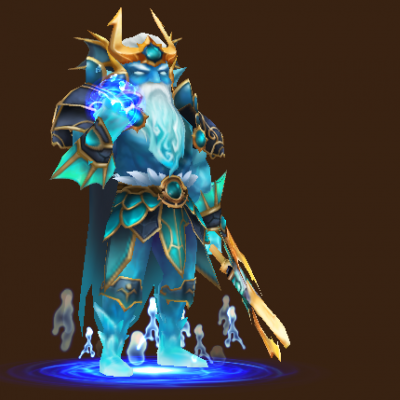 Poseidon together with the rest of Sea Emperor, as a natural born 5 star (nb5), is awesome. I mean really awesome. Poseidon got a set of skills that could make him more of a support than a HP type monsters.

Poseidon first skill which basically attacks an enemy and then transfer all debuffs that you are suffering to the enemy. That is very helpful in the arena. His second skill attacks all enemies with mighty waves, preventing them from using skills with cool times for 1 turn. This skill is pretty deadly to the enemy in the arena. This skill is very awesome but his Maelstrom is much awesome. He basically attacks all enemies and decreases their attack bar by 75%  and slowing down their Attack Speed for 2 turns. His third skill make him ideal part of a speed team.

I would recommend to rune Poseidon with Swift/Energy(SPD/HP/Accuracy). Make him as fast as possible for him to throw the first strike. All energy would also work with him to make him tanky as possible but that would diminish the effect of his second and third skill. Poseidon has 2 AOE skills thus despair would also work. But my personal preference would be to rune him with swift to make him land his 3rd skill first thus giving way to your nuker to erase the enemies in the arena before they even hit.

So where you can use Poseidon?

You can use him everywhere because he got awesome support skills and tanky enough to survive the onslaught of giant and dragon boss.