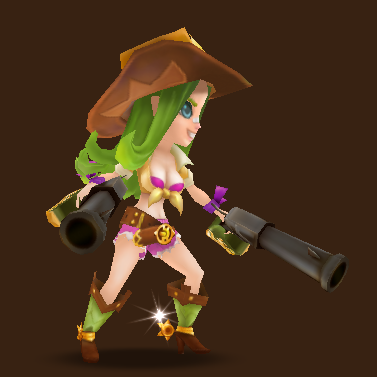 Hannah is a cool looking monster. Who wouldn’t want one. She is the only with a gun in the entire summoners war game. However her base stats is a little bit low but decent. Make sure to get some HP as substats to for survivability.

Her first skill Cross Fire attacks two times and decrease enemy’s attack speed for 2 turns with 30% chance. If you max her skills, she that would be 50% chance. Attack speed debuff is pretty helpful in the arena. Considering her base speed of 117, she is probably the fastest in the game.

Hannah’s first skill would probably helpful but her second skill is a lot more helpful which is Silver Plated Bullet which attacks the enemy 2 times that removes 1 beneficial effects. This is pretty helpful in dealing with shield of Rina. Not only that she was able to remove beneficial effect to the enemy, her second skill also disturbs HP recovery for 2 turns with 50% chance for each attack. That would be 2 chances to land disturb HP recovery debuff.

Her third skill is an aoe attack that receives a +50% critical rate. That would result to a very huge damage if you stack up on critical damage. Given that, he is very very suitable for Critical Damage % for slot 2.

So where you can use Hannah?

You can use him in arena offence, toa and Giant. Because she got multiple attack and high speed, she is a good monster to run necropolis.