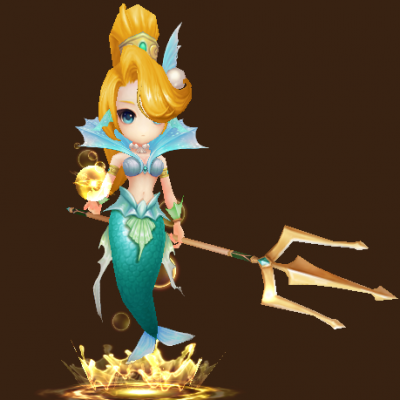 Cichlid is one of the best support in summoner’s war. She got a huge HP pool but she is too slow for a support. So to make her speedy support would be useless, rather build her as tank support.

Her first skill Mana Bubble basically attacks an enemy that has 50% chance to remove beneficial effect. Most notably this skill is scaled through his max HP. So this compliment her high base HP. Pretty awesome.

The second skill removes all harmful effects on ally target and cast a shield for 3 turns. It is not as effective as the aoe shield of sylphid, but this is still awesome because of the harmful effect removal.

The first skill and the second skill is already awesome but her third skill makes her amazing. She attacks an enemy 3 times, with each attack having a 50% chance to decrease the target’s Defense, disturb its HP recovery, or prevent the target from using a skill with a cool time for 2 turns.

I would recommend to rune her violent for more turn. And focus to add more accuracy to her base accuracy of 25%. That would save one slot. On slot 2/4/6 put all HP %.

So where you can use Cichlid?

You can use Cichlid with almost everywhere. Cichlid is useful in toa, arena, giant, dragon, etc.