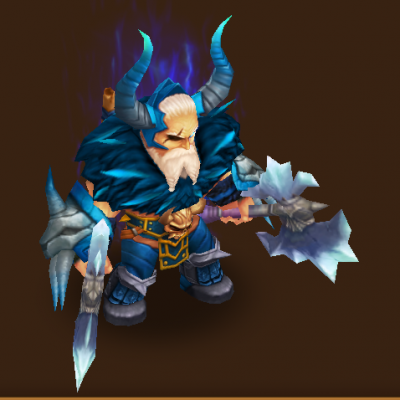 This guy is a little bit tricky to use. Don’t be deceived on how scary he looks. As most of the rest of barbaric king, you need good runes to make Aegir useful. I would suggest go for Rage/Blade with slot 2 and 6 as ATK% while slot 4 as Critical Damage. Get as much HP and critical rate on substats. Because of the additional accuracy that you could get when you awaken him, this will give more room for him for more helpful attribute on substats.

His first skill will attack an enemy twice with 65% chance to inflict continuous damage for 1 turn. Well if you if want him to to use as your dotter, I would recommend to rune him with Violent and Revenge. Moreover since this skill and his third skill is a multi attack he would be useful in farming necropolis thus violent and revenge would make sense to be used on him.

His second skill attacks an enemy with a wrathful axe, leaving a Branding Effect for 2 turns, and increasing your attack gauge by 50%. The target with the Branding Effect will receive 25% increased damage. Pretty cool right? The branding effect is already deadly but the additional bonus of attack gauge increase of 50% is huge. And he can cast this skill every 2 turns @max skills.

Aegir third skill attacks the enemy 2 times, with each strike having a 75% chance to steal 1 beneficial effect from the enemy. When this attack is on cool down, your Attack Speed increases and you recover 10% HP every turn. Stealing a beneficial effect is already helpful, but what would make this skill is the additional attack speed buff and the recovery of HP. And the cooldown for this skill is 3 turns.

I would recommend to build Aegir. He is very helpful. Do not feed him to anybody.

One more good thing about this guy is his leader skill that increases attack power by 33% for all allies in Guild Battles. Seriously that is one hell of additional attack power.

So where you can use Aegir?

You can use him in arena offence and defence. Because of his leader skill he is ideal also with Guild battle. One more thing, because he got multi attack and additional benefits like additional speed, increased accuracy, and most importantly when his 3rd skill is in cooldown he heal himself by 10% each turn he is an ideal farmer in necropolis dungeon.