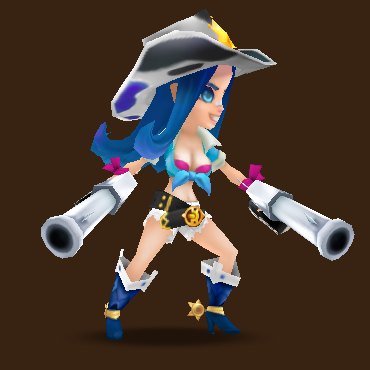 Sera is a cool looking monster. Who wouldn’t want one. She is sexy and she is the only one with a gun in the entire summoners war game. However her base stats is a little bit low but decent.

Her first skill Cross Fire attacks two times and decrease enemy’s attack speed for 2 turns with 30% chance. If you max her skills, she that would be 50% chance. Attack speed debuff is pretty helpful in the arena.

Sera’s first skill would probably helpful but her second skill is a lot more helpful which is Defeat Wild Dog which is an aoe attack (2 bullets each). There is an added 30% critical rate on this attack. Because of this skill plus the awakened bonus of 15% critical rate,  Critical Damage on 4th slot is ideal.

Her third skill Rapid fire fire six bullets and each shot has 65% chance to inflict continuous damage for 1 turn. This is very awesome. Almost the same attack as Orochi, but this one is better because it doesn’t rely on critical rate to proc.

The continuous damage that she can inflict makes her very ideal for giant and dragon. It’s pretty rare to see monster that can be used on both of these dungeon. This is because she is a water type while dragon b10 is fire and giant b10 is water. She is a perfect dot machine. With the recent release of Necropolis dungeon that requires multiple attacks, Sera join can pull it off. Isn’t she fantastic? You can use her in all the dungeons. To maximize this potential rune her with Violent/Focus(SPD/HP/Accuracy).

So where you can use Sera?

You can use her in the arena offence, toa, Giant and Dragon dungeons. Because she got multiple attack and high speed, she is a good monster to run necropolis.