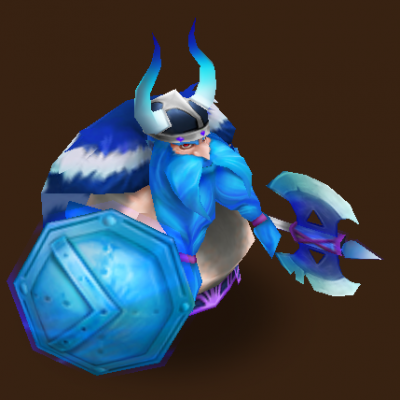 Huga is very strong in early game because of high base attack however he will fail at later game. You can keep him until 5*. He will help you in leveling up but he will miserably fail a later game. The primary reason for this is his ridiculously low base HP and defence. Not only that he is a glass cannon, his base speed is also very low. However he got some interesting skill to support him that’s why he is very good at early stages of summoners war.

His first skill attacks the enemy and inflicts continuous damage for 3 turns with 70% chance @max skills. This skill looks pretty basic but it will deal a huge damage at early game because at this stage there are much good monsters in the arena that can cleanse continouos damage.

The second skillt hrows 3 axes at an enemy. Your Attack Bar increases by 15% if this attack lands as a Critical Hit. This is pretty good because of attack bar increase. But make sure to have a high critical rate to fully utilize this skill.

Huga’s passive skill, basically Increase your Critical Rate by 15% and the damage of your Critical Hits by 30%. This will make him a decent attacker.

Rune Huga with Rage/Blade with slot 2 and 4 as attack % while on slot 4 should critical damage. This will totally make him a glass canon. Make sure to accompany him with a good healer to compensate for his low base HP.

So where you can use Huga?