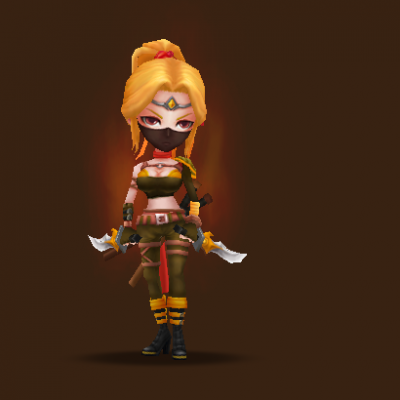 I am a little bit disappointed with Tanya. Her HP is mediocre compare to the sylph which is also attack type. Moreover her attack is also inferior to them. However one good thing on Tanya is that she got a very high def which compensates for her mediocre HP pool. However, having defence for survivability is not highly recommended especially in the arena because of def break and also susceptible to ignore defence skills of some monster particularly Lushen. But her awakened bonus of plus resistance of 25% which is very very helpful.

Her third skill can one hit delete monster because it got a high damage output. And also it can render a harmful effect to enemy monster that prevents healing which is pretty useful. The second skill Capture opportunity is a buff to yourself that increases attack power and Critical rate for 2 turns. By using the third skill, you would gain another turn. So use the 2nd skill first before using the third skill to render more damage.

Exponse weakness skill can reduce defence of the enemy for 2 turns. This is pretty pretty helpful in dealing with tanky monster.

The ideal rune for Tanya is Violent/Revenge (ATK/CD/ATK). This is to make him attack more and render more damage. However if you don’t have decent violent/revenge rune then Rage/Blade (ATK/CD/ATK) would do just fine. Increase critical damage as much as you can to maximize her full potential. Her increase crit rate fir 2nd skill will complement the additional critical damage.

So where you can use Tanya?

You can use Tanya in the arena as offence and defence. You can also use her in Giant B10.